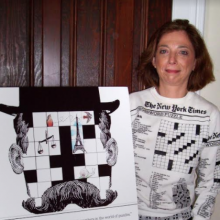 Master puzzle solver and designer Michelle Arnot’s path to ReServe began after a successful career as a publishing executive. In 1977 Michelle sold her first crossword puzzle, for $20, to the New York Times. While a graduate student at Columbia University she met Eugene Sheffer, a retired Columbia professor and puzzle buff who founded the nationally syndicated King Features crosswords. Michelle worked with Dr. Sheffer – who was awarded the Knight’s Cross of the Legion of Honor by the French Government, from 1977 until his death in 1981. She also served as Editor and Publisher of Whitney Communications in New York City, and as Publisher of Kappa Publishing Group. In 1998 Michelle wrote and published Crossword Puzzles for Dummies and Four-Letter Words, And Other Secrets of a Crosswords Insider. She traveled the world and returned to NYC in 2010 and shortly thereafter she heard about ReServe.

Her first placement as a ReServist was as Special Events Manager for the Jacob A. Riis Settlement House, a community-based, non-profit organization that provides services and programs to youth, families, immigrants and seniors in western Queens.

As Special Events Manager, Michelle organized the inaugural Riis Legacy gala, a major fundraising event. The black tie affair at the Museum of the City of New York, was a success, easily raising the target amount of $50,000.

Michelle’s next ReServist placement was as a Project Manager for the New York City Department of Health and Mental Hygiene (DOMH). The 15-hour per week placement proved to be a rich and rewarding experience for Michelle, allowing her to draw on her skills as an editor and author. She wrote a number of texts for the agency including the HIV Care Coordination Workbook, the Eat Well Play Hard newsletter for childhood fitness programs and the DOHMH Triennial Report 2009-2011, which provided an overview of health-related challenges in each of the city’s five boroughs.

“The work was very stimulating and interesting,” Michelle said. “I felt very connected to the health issues of New York.”

When the DOHMH placement ended Michelle moved to I Challenge Myself, a program for designing physical fitness challenges – including a one-day 100-mile bike tour - that allows high school students in high-poverty districts to experience personal and group success through increased confidence in their fitness skills and ability to persevere.

The assignment was primarily for the planning of a fundraising reception slated for October 1, 2013. Michelle loved working for the organization’s Founder and Executive Director Ana Reyes, who ran the nonprofit with great skill on a shoestring budget.

Ana Reyes couldn’t be more pleased. “Michelle is incredibly creative, a self starter and a team player,” she said. “She came in and with very little direct support and helped secure the perfect venue and auction items for our first event.”

“As an expat returning to New York City, ReServe provides the perfect opportunity to contribute to the city’s nonprofit sector and the causes that matter to me,” she said.